AOTOS Honors Chao and Given

Joining the pair with AOTOS recognition at its 50th anniversary gala were Anil Mathur, Alaska Tanker Corp. President and CEO; and Joseph Pyne, Chairman of the Board for Kirby Corporation – both U.S.-flag companies. 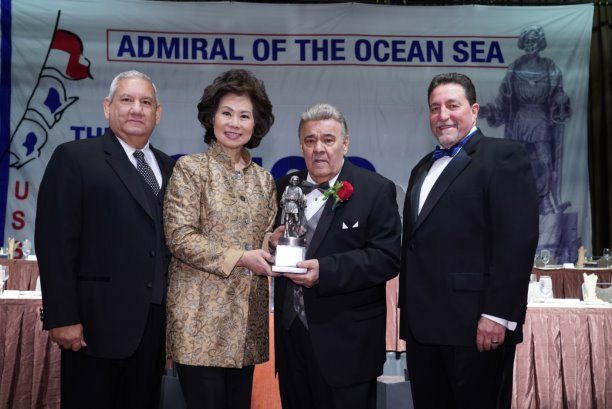 “I am honored to have my work over the years recognized by such a distinguished organization and audience,” Chao told the audience. “I understand very well the sacrifices that merchant mariners experience.

“The men and women in this industry are heroes. I am proud of them and work hard to support them,” she added.

A longtime supporter of the industry, Chao as Deputy Maritime Administrator, chair of the Federal Maritime Commission and Deputy Secretary of Transportation. In 2001, she became the first Asian-American woman appointed to a presidential cabinet, serving as the U.S. Labor Secretary until January 2009 for President George W. Bush. She has served as the head of the U.S. Department of Transportation for President Donald Trump since January 2017.

Introducing Chao was MTD President Michael Sacco, who said, “What some of you may not know is that she is an absolutely tireless worker when it comes to promoting the American maritime industry. Whether we need support of MarAd (the U.S. Maritime Administration) or the Jones Act or cargo preference or the MSP (Maritime Security Program), she always stands up for us – and she always stands up for our crews.”

Given, the president of the Seafarers International Union of Canada, has led the fight for tougher cabotage laws within his country. He also chairs a working group of the International Transport Workers’ Federation to support cabotage laws around the world. SIU of Canada President Jim Given tells the AOTOS gathering that the Jones Act is the international community’s “Gold Standard” of cabotage laws.

He is a third generation Seafarers, having started his career in the deck department in 1979. After sailing for 13 years, he came ashore as a union dispatcher in Thorold. He held other posts within the union before becoming its president in 2013.

In accepting his award, Given informed those attending that the “Jones Act is the Gold Standard” of cabotage internationally. He said any weakening of the law – which states any cargo moved between two U.S. ports must be carried aboard U.S.-built, U.S.-owned and U.S.-flagged vessel with American crews – would have negative implications around the world.

“You who defend the Jones Act in the United States are the defenders of cabotage around the world,” Given added.

Mathur became president and CEO of Alaska Tanker Corp. in 2001 after working for British Petroleum for 20 years in management, corporate planning and facilities engineering. He holds an MBA from the University of California at Berkeley and an MS in Engineering for the University of Tulsa. He is an alumnus of the Harvard Business School.

Pyne started with Kirby in 1978 and climbed through its executive ranks becoming a director in 1988. He retired in April 2018 but continues to serves Kirby’s chairman in a non-executive role.

The United Seaman’s Service presented the first AOTOS Award in 1970. More than 80 maritime industry leaders have been recognized through the five decades.

Established in 1942, the United Seaman’s Service provides community services for the U.S. merchant marine, U.S. armed forces and mariners from around the world at its centers in Europe, Asia, Africa and in the Indian Ocean. It also oversees seagoing libraries to American vessels through its affiliate, the American Merchant Marine Library Association.