MTD, AFL-CIO JOIN WITH STRIKING MINE WORKERS’ FIGHT FOR FAIRNESS The Maritime Trades Department along with many of its affiliates stood with striking United Mine Workers (UMWA) in demonstrations around the United States and Australia on November 18.

More than 1,100 UMWA members from Brookwood, AL, have been on the picket lines against Warrior Met Coal since April 1. In order to keep the mines open and members working, the union agreed to reduced wages and benefits in 2016 when Warrior Met took over for bankrupt Walter Energy with the understanding that the contract would be improved when Warrior Met became profitable. According to the UMWA, the company has shown a profit for the last two years. But Warrior Met has refused to negotiate. 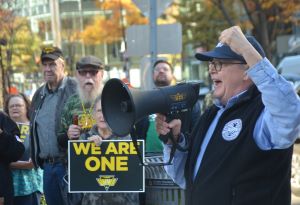 MTD Exec Sec-Treas Daniel Duncan states the department will continue to stand with the Mine Workers during a DC rally.

“We had labor leaders across the nation standing up today demanding justice for working families. Warrior Met and the corporations backing them now know we are not stopping until these families get what they deserved.”